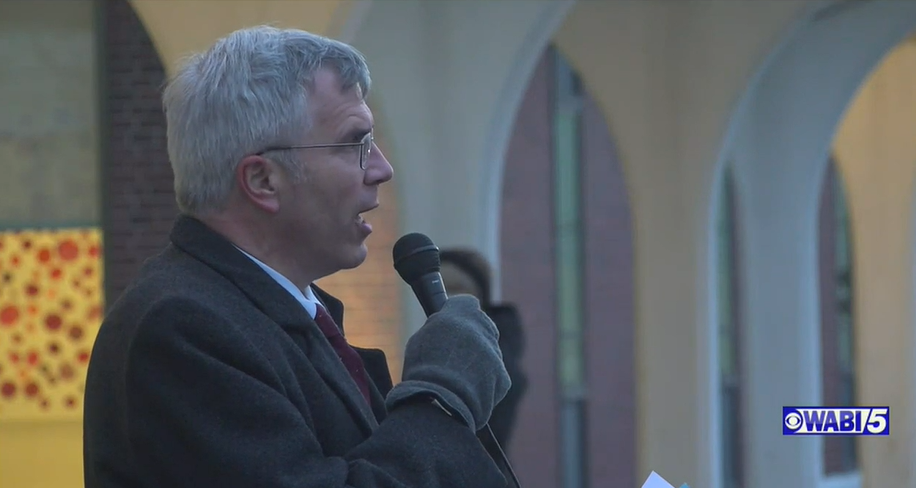 Jan. 6, 2022 marked one year since the attack on the United State Capitol by armed insurrectionists who sought to overturn the legitimate results of the 2020 election. People all across the country came together to remember that dark day with vigils held in hundreds of communities, including many in Maine. John Dieffenbacher-Krall, Executive Director of the Wabanaki Alliance, was a speaker at the the vigil in Portland, and called on all people to recommit to democracy, the right to vote, and actively supporting political self-determination. Here is his statement.

Many people who watched the events unfold in the nation’s capital on January 6, 2021 were shocked as some Americans attempted to block the peaceful transfer of power from one administration to another. Wabanaki citizens were repulsed by the acts of violence and the attempt to thwart the will of 81 million voters.Wabanaki Peoples know what it means to be treated as less than fully human and to have fundamental political rights denied. A Wabanaki person was not allowed to vote in a Federal election held in the State of Maine until 1954. Maine was the last state within the United States to permit Indigenous Peoples to vote in state elections not allowing this essential feature of democracy until 1967.

Today we commemorate the events of January 6, 2021. We must not forget what happened and recommit to defending and achieving fundamental democratic rights for every person regardless of national origin. For the Wabanaki, that means removing the impediments contained in the Maine Indian Claims Settlement Act (MICSA).

On July 10, 1968, then Governor Ken Curtis charged the members of a Task Force on Human Rights…that we search our statutes and our conscience to see that our society at least imposes no legal impediments to each citizen’s full exercise of the rights of all citizens. Where we find legal roadblocks, we must remove them; where we see violations of rights we must provide remedies and sanctions.

The legal impediments thwarting Wabanaki Tribal Governments from exercising basic rights of self-determination exist in the Maine Implementing Act. Maine State Government through the Maine Legislature and Governor can amend that Act with the Wabanaki Tribal Governments to remove the roadblocks to Wabanaki democracy and self-determination. Governor Curtis described acting on such violations of human rights as a matter of conscience. The Wabanaki Alliance calls on Maine State Government to act on this injustice.

The League of Women Voters of Maine and Mainers for Accountable Leadership, two of the organizers of the Portland vigil, released this statement in support of LD 1626:

On the anniversary of the insurrection of the U.S. Capitol, Mainers came together to host candlelight vigils across the state to say: In America, the voters decide the outcome of elections. To prevent this kind of attack from happening again, advocates are demanding that elected leaders pass urgent voting rights legislation at the federal level.

Our democracy is under threat. It is important now more than ever that Congress pass the Freedom to Vote Act to protect our fundamental right to vote. At the candlelight vigil in Portland, advocates spoke about the importance of passing the Protecting Our Democracy Act, the John Lewis Voting Rights Advancement Act, and D.C. Statehood and in Maine, LD 1626 An Act Implementing the Recommendations of the Task Force on Changes to the Maine Indian Claims Settlement Implementing Act.

“Wabanaki Peoples know what it means to be treated as less than fully human and to have fundamental political rights denied. The State of Maine can correct this injustice by passing LD 1626, An Act Implementing the Recommendations of the Task Force on Changes to the Maine Indian Claims Settlement Implementing Act, addressing the worst aspects of the Maine Implementing Act.” John Dieffenbacher-Krall Director Wabanaki Alliance.

“Suppression of any citizen’s right to vote is against everything I have grown up believing in. This most fundamental right of democracy must be protected.” Carol Plummer. Corinth, Maine
“We must ensure that not only can every eligible person vote, but those votes count. That means ensuring that election results are respected and there is a peaceful transfer of power. We can never allow January 6th to happen again. ” Michael Corlew, Hampden, Maine

“Some self-serving politicians and cultural leaders would have us abandon the great legal framework of our nation. It is up to us—all of us—to protect the ideals we cherish as we continue to work toward a more perfect society.” – MIchael Alpert, Bangor Area Branch NAACP

“It is our hope that immediate action is taken to enhance our freedoms and protect the voice of those who have been ignored. We urge all decision-makers to enact legislation immediately that will protect these voices, ensure accessibility in the polls, and make due on the promises that this country claims.” -Peace and Justice Center of Eastern Maine