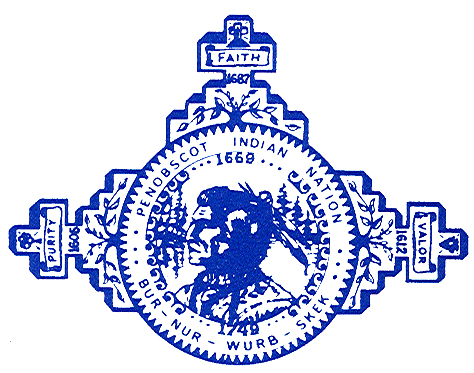 Since time immemorial, the Penobscot Nation, penawahpkekeyak, the people of the place of the white rocks, has inhabited its ancestral homeland situated within the drainage area of the Penobscot River and its many tributaries, lakes, and ponds. The Tribe’s primary village and seat of government, established on Indian Island, alenape meneha, is located immediately above Old Town Falls, a traditional Penobscot fishing place for spearing and netting salmon, shad, and alewives during spring and early summer.

As a proud riverine people, Penobscot epistemology, culture, and society are rooted in their intimate relationship to the river- the source of life that provides all that is needed; the river to which the Penobscot people belong.  The river habitat remains a nourishing source of food, medicine, connection, joy, and spirituality for Penobscot people who engage in and pass down to the next generation the ancient practices of fishing, hunting, gathering, and traveling on the same river that has sustained their people for thousands of years.

The Penobscot Nation supported the Americans in the Revolutionary War, largely on the basis of promises and assurances to respect Penobscot territory and provide aid.  These promises were supported and endorsed by General George Washington in a 1777 letter, but were quickly forgotten once the Americans defeated the British.  In the years to follow, Penobscot Nation petitioned Congress to honor their promises and provide aid but their requests were ignored. The Penobscot Nation fared little better under the stewardship of the Commonwealth of Massachusetts and after 1820, the State of Maine. Neither government honored the agreements to provide for the needs of Tribal people in exchange for the thousands of acres of land they occupied and sold.

By the mid-1830’s, the Penobscot Nation had been dispossessed of much of its aboriginal territory, retaining possession of only the Penobscot River and its islands from Indian Island north.  State appointed Indian Agents exercised total control over the dispensing of food, clothing, shelter, health care, and other necessities, purchased with the money from the sale of misappropriated Tribal lands.  For many generations, the Penobscot people lived at a bare subsistence level.

Not until two hundred years after the Revolutionary War did the Federal Government acknowledge its obligation to the native tribes in Maine.  Congress in 1790 had passed legislation to curtail exploitation of Indian lands (the Indian Trade and Intercourse Act, commonly referred to as the Nonintercourse Act).  Since the United States historically took no action against states for violations of the Act, the legal presumption arose that the tribes in Maine were not protected by this legislation and that the Federal Government had no responsibility towards them.

In 1975, a United States District Court ruled that the Nonintercourse Act was applicable to the Passamaquoddy Tribe and also the Penobscot Nation (Passamaquoddy v. Morton).  This ruling established a trust relationship with the United States and in effect ordered the Federal Government to litigate a Nonintercourse Act claim against the State of Maine for damages arising from the illegal taking of thousands of acres of tribal lands.  The subsequent negotiated settlement of this case, culminating in passage by the U.S. Congress of the Maine Indian Claims Settlement Act (PL 96-420) in 1980, marked a critical turning point in the history of the Penobscot Nation.

The Maine Indian Claims Settlement Act, however, created a unique situation for the Penobscot Nation (and the other tribes in Maine).  By virtue of the act and its accompanying state legislation (the Maine Implementing Act), the Penobscot Nation has both the sovereign status of a federally recognized Indian tribe and the subordinate status of a municipality under Maine law.  While the State of Maine has no jurisdiction over the internal affairs of the tribe, it can (and has) required that the Penobscot Nation comply with provisions of state law that are applicable to non-Indian communities.  This has the effect of imposing a vast range of mandates and regulations on the Penobscot Nation, in areas ranging from human services to natural resources management and environmental protection. This situation has led to various disputes between the State and the Tribe.

The Penobscot Nation’s territory includes more than 4,900 acres of reservation land – including 200+ islands in the Penobscot River.  In addition, the Nation protects and manages in excess of 90,000 acres of trust land in nine locations throughout Maine.

Currently there are 2,398 enrolled members (2020 Tribal Census).  Over 1,399 tribal members live in Maine and are within serviceable distance, and many visit the reservation regularly.  There are 417 tribal members living at Indian Island, with a total population, including non-member residents, of 541.

The Penobscot Nation followed a hereditary Chief system until the early 1800s when they began operating as a democracy. While leaders are elected democratically, the entire adult tribal membership, constituted as the General Meeting, serves at the legislative body of the Nation.  The executive and administrative functions of the Nation are delegated to Penobscot Nation Chief (Chief Executive Officer), a Vice-Chief, and a 12-person council.

A Tribal Ambassador, appointed by the Chief and Council, serves as a liaison between the Nation, the federal government, and the State of Maine government.   The Nation’s administrative functions, overseen by the Chief and Vice Chief, are carried out by 16 tribal departments and include housing, health, social services, and tribal court.

The Penobscot Nation Judicial System, comprised of the Tribal Court and the Court of Appeals, is the adjudicatory branch of the Nation’s government.   The Nation is governed in accordance with its thirty-one (31) chapters of Tribal Law.  The Nation’s government is funded by federal 638 contract funds, federal, state and private grants, and a modest amount of tribally generated funds. Notably, the Penobscot Nation’s Healing to Wellness Court has been nationally recognized for innovative, culturally based intervention that combines judicial oversight with Tribal healing and wellness services.

During the forty years since the Maine Indian Claims Settlement Act was created, the Penobscot Nation has worked diligently to establish basic governmental services, physical infrastructure (roads, sewer, water, housing, and schools), and human and social services enjoyed by most of the nation’s other Indian tribes for decades as a benefit of Federal recognition.  At the same time, the Nation has struggled to address complex issues of tribal rights and responsibilities arising from its legally imposed status as a Maine municipality.  The Penobscot Nation has been aggressive in implementing initiatives to foster and support the preservation and resurgence of tribal culture, traditions, and language and to protect the Penobscot River.  The Penobscot Nation is known as one of the oldest continuous governments in the world, and we remain committed to protecting our territory, preserving Penobscot culture and ensuring that future generations can live as Penobscots.